Showing posts from August, 2012
Show all

For Ever Book Tour

For Ever starts now... Sixteen-year-old Wren Sullivan doesn’t want to know what other people are thinking about her because most of the time it sucks. Too bad since that’s what happens every time she looks into someone’s eyes. When she moves to Portland, Oregon, after her parents divorce, Wren’s just hoping to get through the rest of her junior year unscathed. Instead, before the end of her second day in school, she wakes up in the hospital after her very own freaky demonic-possession incident. Wren can’t remember much. But soon she finds out that her   episode happened right after she locked eyes with the one classmate who happens to have gone missing. Wren starts digging through people’s heads for the truth about him, and finds nothing. Godlike hotness? Yep. But nobody knows who Ever Casey really is. Even weirder, they don’t seem to care that he just disappeared. So, when he randomly shows up again in her first period class, she’s determined to get some answers
7 comments
Read more

Every woman needs a good-looking handbag to complete her outfit, and BagBlaze.com provides personalized and unique trends for every purse fanatic. For over 10 years, fashion statements have been made with our complete  selection of stylish and stunning handbags . With our penchant for purses and an enthusiasm for trends, we offer under $39.95 on  daily blazing handbag deals . Your budget will love - and benefit from - our modest prices. Our contemporary and swank collection of bags offers options for a variety of situations or events, from dressy satchels to slouchy hobos for happy hours to evening clutches for date nights and casual totes for the workplace or everyday carryall. I got to review the Alice Satchel =] Coordinate or contrast your favorite purse with Alice Satchel! The exterior is smooth leatherette with a slight sheen, and perforated trims create stripes on the front.  • LASER CUT OUT DOUBLE HANDLE SATCHEL  • 19” x 10” x 7” Review by Jen'
Post a Comment
Read more

Refresh your memory with my review HERE Website Enter below to win your every own Slice Safety Cutter! a Rafflecopter giveaway
Post a Comment
Read more 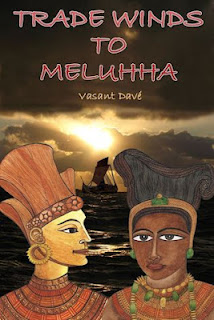 Trade winds to Meluhha' is set in the Bronze Age. It narrates a young man Samasin's adventure in Mesopotamia and Indus Valley Civilization. He is charged with murder and escapes death through a rare astronomical event which is actually recorded in clay tablets excavated in ancient Babylon. He lands in Meluhha (Indus Valley) where besides the query he also finds wealth and love. Buy your copy today!   Amazon   Barnes & Noble   My Review I received a free copy from the author for my honest review.   At first I was a bit intimidated once I saw the large cast of characters.   I honestly wondered if I would be able to keep track of them all.   In the beginning it’s a bit confusing but as you read on you see the characters beautifully interwoven.   There’s a great mix of action, adventure and romance.   I felt really bad for Samasin, as he was really unfortunate, anything bad that happens, happened to him.   He was fated for death even!   All in all, t
2 comments
Read more

Visit SSFAM- Music Monday!!! Do you love music?  What is in your playlist right now?  What do you think about new music and artist?  How do you save on your music purchases?  Simple Savings For ATL Moms has teamed up with some great managers to bring you savings on new music and to let you know about new artist featured on her blog! These artists will be from different genres of music.  Not only do you get the chance to hear and support their new music but you also get the opportunity for some great prizes on her Music Monday Event. Featured New Music Artist will range from a certain genre and you never know which artist will be shown (Rock, R&B, Hip Hop, Country, Trance, Pop, Opera, Latin, Classical, Soul, Jazz, Heavy Metal, Religious or Reggae). Be sure to take some time to get to know the artist but also see the many giveaways including cash on her blog that will continue to help you save on your Music! On with this week's music! Music Genre Hip
Post a Comment
Read more

Cover Reveal for the My Merlin Series

Cover Reveal for the "My Merlin Series" Ever My Merlin coming this Fall! My Boyfriend Merlin He was a little older than he was letting on. By a few eons… In this modern day teen Arthurian, 17 year-old Boston high schooler Arriane, aka Ryan, DuLac just found out the guy she's been crushing on, hot biker Matt, is a little older than he was letting on. In fact, he is really Merlin — the Merlin , King Arthur's Merlin, the greatest wizard who ever lived. Frozen in a cave for over fifteen hundred years, he's woken for a purpose. But Ryan's not impressed. Tired of being a relationship loser, she'd rather kick his legendary behind. Sure, the world has been crazy ever since the sword and the stone fell out of the sky like a meteor. But despite gruesome gargoyles, a deadly new world of magic, and the guy driving her crazy, Ryan knows that family is everything. Will Merlin sacrifice hers to save the world? Will she be able to stop him? Purchase o
4 comments
Read more

Perfect for summer travel, this compactable and travel-ready Take Along Soccer Match includes a 22 x 33 inch field, soccer ball and other accessories. To further enhance the soccer experience, the figures have a leg that kicks to propel the ball forward, which helps make playtime more realistic. There are also goalie figures that connect to goal joystick, which allows kids to control the goalies’ movements from behind the goal net. The PLAYMOBIL Take Along Soccer Match is ideal for kids ages five to ten; because of small parts it is not recommended for little ones under the age of three. Visit  Playmobilusa.com  to redeem the coupon code US72A12C for 20% off Playmobil Take Along items. Jenn at Jenn's Book Blog Review "Coolest toy ever!!" That's according to my 4 and 7 year old lol. They are both obsessed with soccer and I'm honestly not sure why. We don't play it and we don't watch it lol, but whatever, they are happy and
Post a Comment
Read more

Each Funbites ® Pack includes a high performance curved blade cutter that quickly creates small bites and a matching popper top that pops out food instantly so hands are clean, food is untouched.  F unbites ® is 100% MADE IN THE USA, BPA free, hand wash or dishwasher safe. My Review I recieved the pink cutter with the geometric heart for review.  I loved this product, we have little girls at our church ages 2-8.  They are picky eaters, but we used our funbites at a church function.  I showed the little ones how to make a heart out of their fruit, they thought it was so neat and then ate the heart!  I was thrilled, they ate and had fun too!   No purchase is necessary to enter. Void where prohibited by law. The odds of winning are based on the number of entries received. This promotion is no way sponsored, endorsed or administered by, or associated with, Facebook and is Facebook-compliant. Winners will be notified by email from a ‘Pitch List ‘ Blog. Winners
Post a Comment
Read more
More posts