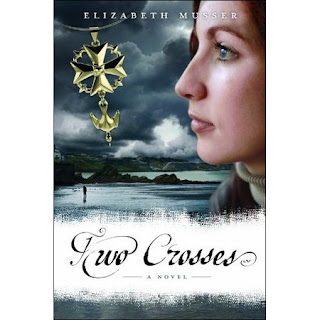 The glimmering Huguenot cross she innocently wears leads her deep into the shadows.

When Gabriella Madison arrives in France in 1961 to continue her university studies, she doesn't anticipate being drawn into the secretive world behind the Algerian war for independence from France. The further she delves into the war efforts, the more her faith is challenged.

The people who surround her bring a whirlwind of transforming forces-a wise nun involved in the smuggling, a little girl carrying secret information, and a man with unknown loyalties who captures her heart. When she discovers a long hidden secret from her past, it all leads to questions about trust, faith in action, and the power of forgiveness to move beyond the pain of the past.

A woman and young girl bonded not only by war but by a Huguenot cross they both share.  This novel took me by surprise; I expected it to be rather boring and focused on the Algerian war.  I was delighted to see this historical fiction novel also had romantic and suspenseful aspects to it.  I thoroughly enjoyed it, although it was rather long and left me hanging in the end.  I look forward to reading the sequel “Two Testaments”.