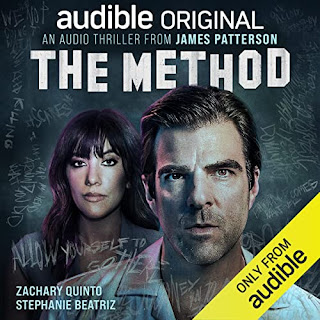 Synopsis:  “Once this journey takes hold, I find I’m able to think as my character thinks, act as he acts, and feel what my character is feeling...”
James Patterson leads you into the darkest recesses of the mind with this chilling, immersive audio thriller. We meet Brent Quill, a frustrated actor trying to take his game to the next level. When he learns about the intensive Method acting process, he dives in deep—and immediately lands the lead role in a TV series about a brutal serial killer.But when the Method’s controversial techniques start to take over Brent’s psyche, the lines between real life and acting begin to blur dangerously. How far will Brent go to “become” the character?
Purchase from Amazon
**Please note: This audio drama is for mature audiences only. It contains strong language, violence, and sexual content. Discretion is advised.**
My Review: O.M.G....that was my first reaction. Brent really wanted the part and literally did whatever he could to be what the director desired.  His buddy recommends acting lessons, Method acting lessons to be exact.  My mind was blown once I realized what was happening. I guess he was already on the edge.  This was a true James Patterson novel, non stop action and an original storyline.
James Patterson Mystery Thriller