Almost without his notice, Tom had slipped from childhood through adolescence and then into young adulthood woefully unprepared for that transition. Both his childhood and his adolescence had been hells of isolation and rejection. And there had been no emotional support at home either. His only tranquility had been the wilderness, to which he escaped whenever possible.

But this is only the set up for the real hell which was to follow, coming in the guise of a beautiful and seemingly innocent young women named Mary. Schooled in etiquette, God, and discipline, she was equally skillful at secrecy and pretense. And unable to see behind her subtle facades, Tom mistakes her demure reserve for shyness and under that illusion, he tumbles into a deep, undying love, into which inexorably pour all of his pent up needs and desires. The delusion is only broken when Mary suddenly reveals a cold indifference to his emotions. Then upon dispatching him with sudden sly cruelty and consummate betrayal, she immediately vanishes behind a veil of silence.

In this explosive coming of age story we are taken down the rabbit hole of unrequited love and rejection, where in the depths of despair, Tom must wrestle with the devil of his darkest emotions and deny that devil his every temptation to commit heinous acts of evil. There is no rape or murder beyond the wild imaginings of Tom, who in the aftermath of Mary's brutality, goes completely psycho, in this nightmarish book of tragic love. In fact, it is almost miraculous that those atrocities do not happen, given the intensity of Tom's rage.

In witnessing Tom's struggle, however, we are brought to a better understanding of human sexuality, how people can be driven to violence, and why people sometimes die by suicide. As Tom makes a slow and arduous climb out of his abyss, we learn how to survive heartbreak and emotional abuse. Launching into psychotherapy, he begins the process of peeling back the onion to find his hidden demons. During this painful process he struggles with an inability to forgive himself for becoming a victim, and in equal part, an inability to forgive the ghost of Mary, for her profound cruelty and dishonesty. But with the scepter of suicide ever lurking, it becomes increasingly clear how much his very survival depends on his letting go of his anger and letting go of the past.

You may prefer to skip the foreword (written by and intended for professional therapists) and advance to the beginning of the story, which holds some of the books first cryptic poems that hint of lost love. They are descriptive of the struggle to come.

In order to come to terms with what has befallen him, Tom must first confront the reality of what had happened and thereby break the spell. To do this he must deeply examine every nuance and motivation of the personalities involved. Ultimately his quest for serenity will bring him to truths about human nature that are so simple and fundamental, they are perhaps universally understood by every fully formed adult. But to Tom's inner child, these truths have been consistently denied and unacknowledged.

A Prison of Lies is an unblinking look at the emotional development of a pathological mind. At times it is frightening and disturbing but it is also heroic and enlightening. It offers perhaps a unique Rosetta Stone for understanding many outcomes of mental illness with a clarity that can only be told by someone who has made that passage.

A Prison of Lies is a new kind of book on mental illness. Unlike many fictions which only use mental illness as a device to drive the plot, A Prison of lies plunges into the heart of the illness and keeps its focus there. And unlike nonfiction books on the topic, which tend to be dry and clinical, this book is a gripping read.

I received a free copy of this novel in exchange for an honest review.  "Prison of Lies: A Journey Through Madness" is a moving story of one man's battle with mental illness.  Tom had grown up an awkward, uncoordinated child, he also had problems fitting in and making friends.  Now, he's in college, and he feels even more alienated because of his naivety, he is abundantly aware that he isn't as advanced as the other kids he is around.  When he meets Mary, he falls head over heels in love with her.  When things begin to go sour, he's unable to let go and he begins to lose touch with reality.


This was an eye opening novel about what goes on in one's mind as they begin to travel the dark path of mental illness.  Although enlightening, this was a difficult read.  My heart broke for Tom as he was repeatedly rejected by his roommates and peers alike. As I read, I continually wondered why no one saw this coming, but I guess it's because he didn't really get close to anyone.  I'm glad that he sought help and I hope he has finally been able to have the closure he so desperately needed. This is definitely a must read if you want an inside view of mental illness. As this fiction is inspired by his own struggle with mental illness, Robert Thomas Doran is grateful to god for helping him recover from mental illness. Today he lives in Pennsylvania with his wife of fifteen years. A Prison of Lies was written as an act of faith and with the hope of helping others afflicted with mental illness.


"A Prison of Lies is a powerful and eye opening novel. In reading it, I was compelled to imagine myself and my loved ones in Thomas Doran's shoes. It was painful to experience his struggle to break free of the demons that engulfed him, and to witness that inner war, much of which was fought without any outside system of support. Having read this book, I hope to be more aware of my own words and actions. We are often unaware of how deeply our words and actions are impacting others. Definitely a good read for the soul." - Cheryl Snoha

"Robert Doran has painted a gripping, detailed mural of the progression of mental health illness. He depicts a torn canvas of a damaged youth, the downward spiral that ended in a nervous breakdown during his early adulthood, and his courageous yet painstaking road to recovery. The dark world Doran portrays within the mind of the protagonist and about mental health illness will introduce people to ways of thinking that are rarely spoken of out loud. Moreover, the book promises the idea that such problems can be overcome." - Chad Coren, PsyD

"I would recommend this book for anyone who has a loved one suffering from mental illness who would like to know what is going on. I would also hope that it could be offered to young people. If I had read this book at 18 I might have known what the signs were and had a better idea of how to offer help. I would have been better prepared for life and been of more use to people who were dear to me." - Robert C. La Mont

NOW FOR THE AUTHOR'S GIVEAWAY 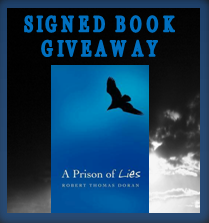 5 LUCKY WINNERS will each receive a signed book from the author
Open Worldwide
Ending on Thursday 6th March at 11.59pm EST