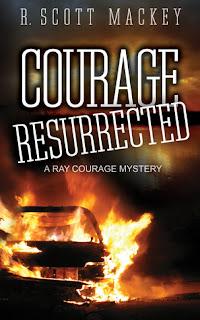 Ray Courage’s wife Pam died thirteen years before in a car accident. Or did she? Ray’s world is turned upside down when he receives a series of e-mails from someone claiming to be his dead wife, accusing him of attempting to kill her and vowing revenge. Ray sets out to find the identity of the e-mailer only to discover the circumstances of his wife’s apparent death appear to be all but accidental. Soon Police Detective Carla Thurber comes to suspect Ray of killing his wife, and of a subsequent murder of Pam’s confidant. Meanwhile, a murderous predator who does not want the facts of Pam’s death to surface aims to stop Ray. In the greatest challenge of his life, Ray must outrun the police and elude those who are out to kill him as he seeks the truth about his wife’s death.

Courage Resurrected is book three in the Ray Courage Mystery series.  The story begins thirteen years earlier with Ray's wife visibly upset and driving around to avoid going home.  She suddenly senses she's being followed.  The scene switches to present day, on the thirteenth anniversary of Pam Courage's death.  Ray receives a cryptic email message from someone claiming to be Pam and accusing him of trying to kill her.  What he began to think was a prank causes him to investigate her accident on his own.  Was it really an accident or did someone murder her?  If so, why?  The reemergence of someone claiming to be his wife has not opened old wounds but a trail of death along the way.

This was a fantastic mystery that kept me guessing until the very end.  There were so many plausible reasons for her death, but the truth will definitely surprise you.  The reason is even more shocking.  All in all, Courage Resurrected is a fast paced action packed mystery everyone will love!

About the Author:
Scott Mackey lives in Northern California, where he writes both fiction and non-fiction. He is the author of the highly acclaimed Ray Courage Mystery Series: Courage Matters, Courage Resurrected, Courage Begins, and Courage Lies Beneath (scheduled for fall 2015 release).
Connect with Scott:
Website - Goodreads - Facebook - Twitter
5 Stars Mystery