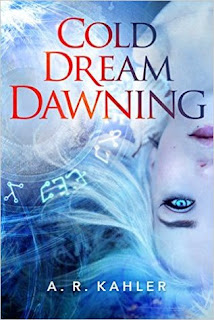 Synopsis:
Though trained as a ruthless and efficient killer, Claire barely survived her last assignment. Still reeling from the summoning of the deadly Pale Queen and Roxie’s betrayal, she’s unprepared for Queen Mab’s next demand: to help uncover a new threat to the kingdom, Claire must hunt down the mortal mother she’s never known.

But Claire’s divided loyalties may be the least of her worries: her mother, the former star of the Immortal Circus, has other enemies—including the Summer King. To save the Winter Kingdom from the Pale Queen’s dark designs, Claire must attempt to awaken her mother’s hidden magic. But even if she succeeds, is there magic potent enough to protect her from the dangers lurking in the treacherous forests of the Wildness—or from the shadows in her own heart?


My Review:
This is book two of The Pale Queen series.  In book one we're introduced to Claire, Winter Fairy Queen Mab's adopted daughter and trained assassin.  In this portion, Claire is no longer finding out who is stealing "Dream", she is now hunting down the Pale Queen in order to save Winter and Summer.  In order to do this, she must find her biological mother, The Oracle.

This story had me completely enraptured!  I love all of the magic involved, especially Claire's since she's a mortal.  I also enjoy Eli, he's always saving her life.  This novel has tons of nonstop action and even twists you don't see coming....time for book 3. :)
5 Stars Paranormal