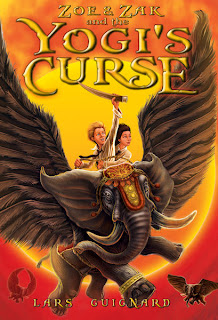 Zoe and Zak are back in India. Again. And this time they’re attending Moonstock Himalayan Boarding School, which might seem fun except for the fact that the school is a little strange. Students ride elephants instead of school buses, snarling monkeys work as security guards, and angry parrots monitor the halls. And even when they manage to get used to the wildlife, the food is absolutely terrible.But living with a bunch of other kids their age can be a lot of fun too, or at least it seems that way until Zoe’s roommate goes missing. Following the directions written on a steamy bathroom mirror, Zoe and Zak fly through the clouds on their magic carpet to learn that the two of them have been chosen yet again. This time they’ve been asked to lift the Yogi’s Curse.It’s not going to be easy. Zoe and Zak don’t even know what the Yogi’s Curse is let alone how to lift it, but like it or not, they soon discover that a whole lot of people are depending on them. Now, if they’re going to save the day, they’re going to have to fool the monkey guards, avoid the nasty parrots, and maybe even develop a supernatural ability or two. Because lurking beneath Moonstock is a powerful new enemy. And if Zoe and Zak can’t stop him, nobody can.
Purchase: Amazon

My Review
I received a free copy of this novel in exchange for my honest review.  This is book two in the Zak and Zoe Adventure Series. It's been three months since their Ghost Leopard adventure. Two weeks ago, Zak, his dad, Zoe, and her mom moved to New Delhi for their parents new job. Because of the amount of traveling they are required to do, Zak and Zoe apply to the very best boarding school in India. They embrace this as a new cultural experience, to make new friends and learn from all of the challenges 7th grade will give them. They would have never guessed that their Ghost Leopard adventure was a piece of cake compared to what's in store for them this time.


Lars Guignard has done it again with a fantastic action adventure novel. I loved the story staying consistent with the nasty school food and each teacher having notably unique characteristics. This was such a fun and imaginative novel, with some emotional aspects as Zoe struggles to fit in, fights homesickness, and struggling with her new yogi powers. This is must read for any 10-12 year old! This is a great series and I can't wait for book 3! 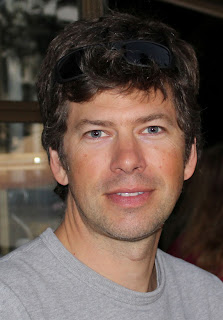 Prior to writing novels, Lars Guignard wrote for film and television. As a teenager he attended boarding school in the Indian Himalayas and his experiences there provided the inspiration for the Zoe and Zak series which now include: Zoe & Zak and the Ghost Leopard and Zoe & Zak and theYogi's Curse.

He now makes his home in the Pacific Northwest where he is busy completing the third Zoe & Zak adventure for release in the Fall of 2013.
Connect with Lars:
Website | Facebook | Twitter
5 Stars Adventure New Release