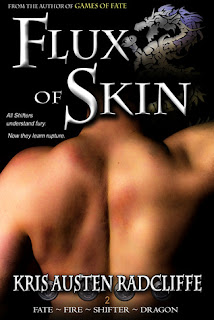 Flux of Skin, book two of the Fate ~ Fire ~ Shifter ~ Dragon series, picks up Ladon and Rysa’s story four hours after the events of book one, Games of Fate.

How many loves must Ladon watch die?

Ladon thought he controlled the rage. He thought he left his past—and his violence—behind. But the Shifters take Rysa and now no one is safe…

Ladon wanted a gentle life. But century after century, the call to battle malicious Fates, Shifters, and Burners always won. The world needed him. So he fought.

War took its toll and now, sometimes, his scars show. When it happens, Ladon ruptures—body, mind, and soul. And the world pays.

But he’s found a new way: a modern life with his beloved Rysa. He won’t give her up. Not because of family strife. Not because of the issues twisting her life into a raging cyclone. And definitely not because of war—until a new group of Shifters rain death onto everyone he loves.

My Review
I received a free copy of this novel in exchange for my honest review.  This is book two of the Fate ~ Fire ~ Shifter ~ Dragon series.  In this portion we see Ladon is injured from the battle at the end of Book 1.  Rysa, once again has a high fever, but this time, he healer side has been activated.  They, along with Derek, his wife and both dragons are on the run.  Only this time it isn’t just Burners that are after them, but Shifters as well.  Ladon will stop at nothing to keep the woman he and his dragon loves safe.

This was a fantastic novel.  There was non-stop page turning action, lots of suspense, and romance.  I loved Ms. Radcliffe’s writing style.  She flips from past to present so that we can fully understand the connection each character has with one another as well as why Ladon behaves the way he does.  If you liked Games of Fate, you will absolutely love Flux of Skin; Ms. Radcliffe does not disappoint.  I can’t wait to find out what happens next!

As a child, Kris took down a pack of hungry wolves with only a hardcover copy of "The Dragonriders of Pern" and a sharpened toothbrush. That fateful day set her on a path traversing many storytelling worlds--dabbles in film and comic books, time as a talent agent and a textbook photo coordinator, and a foray into nonfiction. After co-authoring "Mind Shapes: Understanding the Differences in Thinking and Communication", Kris returned to academia. But she craved narrative and a richly-textured world of Fates, Shifters, and Dragons--and unexpected, true love.
Kris lives in Minnesota with her husband, two daughters, Handsome Cat, and an entire menagerie of suburban wildlife bent on destroying her house. That battered-but-true copy of "Dragonriders"? She found it yesterday. It's time to pay a visit to the woodpeckers.
Connect with Kris on Twitter
5 Stars Paranormal Romance