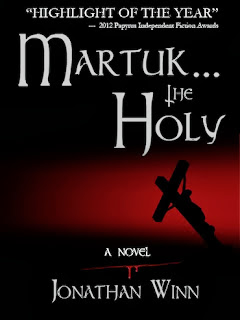 "I am Martuk. Remember, it’s Martuk as in “too”. Or “two” with that hard “k” at the end. Martuk. The Holy. The audacity of it still makes me smile."

In a crowded Left Bank cafe, an immortal man sits, the phantoms crawling near, the heat of their whispers stinging his cheek …

and Martuk ... The Holy begins.

One thousand years before the birth of Christ, a golden god damns Martuk with a kiss. In a land ruled by a wounded king, life everlasting steals his mortality from the bottom of a golden cup. Finally, generations later, a Messiah who has the power to heal breaks under the weight of Martuk's demons, stumbling to his death defeated by darkness.

From his home in modern Paris, he writes, his memories lush, his words evocative. Revisiting his impossible life, he vents his rage and shares his loneliness. From bloody battles with a demon he cannot escape to the ghost of a beauty who haunts him still, this is his story.

This is Martuk ... The Holy.
Purchase: Amazon

My Review
I received a free copy of this novel in exchange for my honest review.  When Martuk was a child, he was unknowingly cursed by a golden god with immortality.  He has a gift of seeing through the veil, having visions, and seeing ones soul.  His land is ruled by a sickly king and he is called to speak with him.  After the king’s demise, Martuk is forced to drink from the golden cup, he’s supposed to die.  He sees his ancestors reaching for him then… He finds himself alive!  This is how his journey begins.

Although a little slow in some parts, Martuk… the Unholy is a pretty good read.  It spans thousands of years, so it’s also a semi-historical horror story.  The violent scenes were pretty graphic, so this novel certainly isn’t for the sensitive stomachs.  But if you can get past that, this book has awesome “wow” moments.  You connect with Martuk immediately and sympathize with his desire to die.  I know lots of people in today’s society wish they could live forever.  But this book looks at the harsh reality of it.  You may garner fantastic riches but what’s the point of it all if you have no one to share it with?  Definitely a great October read! 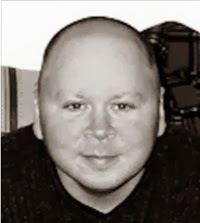 I write. A lot. But before I wrote, I dreamed. That's what an unpopular kid in a small town surrounded by trees and mountains does. It wasn't until I was an adult -- living in Greenwich Village in NYC -- that I finally felt compelled to give my characters a voice. Ergo, screenplays, plays, and books soon followed.

And they still do. My first book, Martuk ... The Holy, has a sequel currently being written. It's also spun off into a prequel, of sorts. An ongoing collection of Short Fiction called The Martuk Series, the first installment being The Wounded King, it's based on characters introduced in Martuk.

Enter to win one of five copies of Martuk... The Holy!
a Rafflecopter giveaway
5 Stars Giveaway Historical Fiction Horror