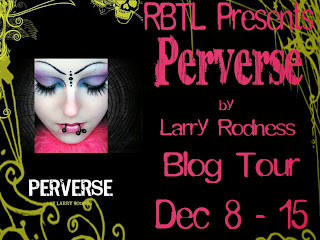 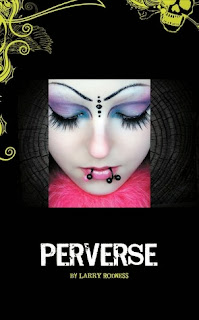 
A supernatural fiction about a 2nd generation teenage Goth teen named Emylene Stipe who finds a charcoal sketch in an antique shop. When she brings it home an image of a young girl appears in the sketch and then materializes in her apartment. Emylene introduces this girl whom she nick-names ‘Poinsettia’, to the local Goth crowd and the two become fast friends. But Poinsettia has an ulterior motive for her sudden and strange intrusion into Emylene’s life which causes Emylene to question her whole belief system.
Purchase: Amazon | Barnes & Noble

Author Interview
Today I was granted an awesome opportunity to interview the author of this fantastic paranormal thriller Perverse. Let's begin:

Q. When and why did you begin writing?
A. I actually began my career as a singer when I was in my teens and have been making my living at it for over 30 years. In my early twenties I was hired to sing in a rock opera and was inspired to write my own. The first full scale musical I wrote was based on an old movie called “The World Of Suzy Wong” – never produced. However, over the years I wrote musicals, dinner theatre and screenplays. “Perverse’ is my second novel, my first being a coming-of-age novel entitled, “Today I Am A Man.”


Q. When did you first consider yourself a writer?
A. I wrote my first song when I was about 12 years old on an $8.00 guitar. My mother said it was as good a song as she’d heard on the radio. I suppose that little bit of encouragement gave me the confidence to at least not give up then and there.


Fast-forward to university. I was given an assignment in an English  course and received a failing grade. My professor suggested I could either rewrite the essay or write something original that would express the assignment in a creative style. I ended up writing a story and received a B+. That was it for me.

Q. What inspired you to write your first book?
A. I was born in Toronto, Canada back in the 50’s. In the early 60’s my family moved to Los Angeles to seek a better life. It turned out to be the worst decision we ever made. Three years later we returned to Toronto where I have lived, married and raised 3 children with my wife. My first novel, “Today I Am A Man” was written as a way to work through that traumatic period in L.A.

Q. Do you have a specific writing style?
A. I’ve never really analyzed my own style but if pressed I would say that I like to anchor my stories in reality so when they take a turn into the paranormal or supernatural they have more of a sense of realism.

Q. How did you come up with the title?
A. Perverse is one of those throw-away words that kids use like ‘awesome’. The lead character, Emylene Stipe, is a teenager who would use such a term so it felt right. But the term is also one of the themes in my book and helped guide my writing. Whenever I came to a plot-point I would ask myself what would be the next logical step. Then I’d go the opposite way, the way of the perverse.

Q. Are experiences based on someone you know, or events in your own life?
A. This being a paranormal story, I can say that nothing is based on anyone I know nor anything that has taken place. However, in my research I have interviewed a number of Goths, listened in on teenage conversations in malls to get their sense of dialogue, and used my city, Toronto, as the backdrop.

Q. What books have most influenced your life most?
A.
Q. If you had to choose, which writer would you consider a mentor?

A. Though I do not attempt to emulate any author or his work I admire John Irving. His stories are true to life yet quirky, always compelling and requiring the reader to turn the next page.


Q. Is there anything you find particularly challenging in your writing?

A. I don’t seem to run out of ideas, not have I ever faced writer’s block – luckily. My biggest challenge is having enough time to write.

Thank you for taking the time out of your busy schedule to do this interview.  It's been a pleasure learning more about you and I look forward to reading more of your work in the future! 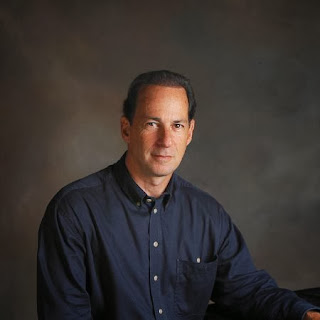 
Larry Rodness began his entertainment career as a professional singer at the age of 19 and has been performing in Toronto for over 35 years with his wife and singing partner, Jodi, at venues such as The Old Mill, Royal York Hotel, Skyline and Bristol Place Hotel as well as countless corporate and private functions.

In the 80's Larry studied musical theatre writing with PRO under Broadway conductor Layman Engel, which led him to write for dinner theater. He then moved into the screenplay arena where he has written over a dozen screenplays and has had 3 scripts optioned to date. In the past 2 years he has also become a published novelist.