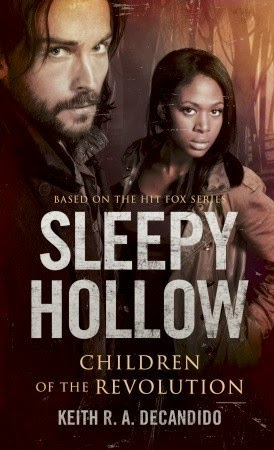 Synopsis:
When Ichabod Crane, a soldier from the Colonial Army, is resurrected from his grave, more than two centuries after he was killed in battle, he partners with Lieutenant Abbie Mills of the Sleepy Hollow Police Department to fight the evil forces that have taken hold of the town.

It’s a cold day in January, and Ichabod visits Patriots Park for a moment of peace. Instead, he receives a disturbing vision from his wife, Katrina, in which she delivers a cryptic but urgent message: he must retrieve the Congressional Cross that he was awarded by the Second Continental Congress for bravery in action. There’s just one problem: Ichabod was killed before he ever received the medal, and he is unsure where it might be. Together Ichabod and Abbie set out to uncover the mystery of the cross and its connection to George Washington and his secret war against the demon hordes. They soon learn that a coven of witches is also seeking the cross in order to resurrect their leader, Serilda, who was burned at the stake during the Revolutionary War. Now they must locate the cross before the coven can bring back Serilda to exact her fatal revenge on Sleepy Hollow.

Sleepy Hollow: Children of the Revolution is based on the television series Sleepy Hollow.  Abbie, Jennifer, Captain Irving and Ichabod Crane are battling evil once again.  Crane has a vision, and in this vision Katrina urges him to find his Congressional Cross.  Unfortunately, he died before receiving it, so the hunt begins.  But not before the other crosses are stolen and they uncover a sinister plot; Serilda’s coven is once again trying to resurrect their mistress and they need the crosses to do so.  Now it’s a race against time to thwart the coven and prevent the resurrection.  Will Crane locate his missing cross?  Will they be able to stop Serilda once again?

This is my favorite television show, so when I was given the opportunity to review this book, I jumped at the chance.  This is the first time I’ve ever read a book based upon a series, it’s usually the other way around, so I read with an open mind.  I was happily surprised that the book is just as great as the television show.  The author puts such vivid details, that you can visualize the entire scenario in your mind’s eye. The parts I found quite comical were when Ichabod Crane tried to understand twenty-first century slang as well as cop lingo.   The story takes place between two actual episodes of the series and I thought that was really neat also.  This book was seriously difficult to put down; it has everything the television series does and more! I really hated to see it end, I hope there are more of these stories coming!