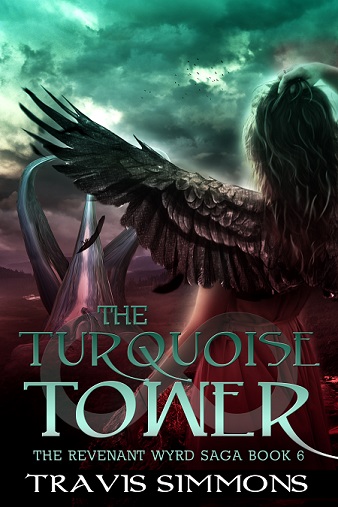 NEWLY RELEASED.....
The Turquoise Tower (The Revenant Wyrd Saga #6)
The captivating sequel to A Guardian of Shadows.

In the mystical lands of the Great Realms, Angelica, Jovian, and Joya search for their kidnapped sister, Amber. Their quest has led them through many dangers and revelations, but nothing has prepared them for what’s about to come.

A dream reveals what Angelica and Jovian are, but what does it mean for their future? There’s little time to dwell on this, for the chaos dwarves, the scourge of the Realm of Earth, are gathering at the gates of the Guardian’s Keep. The dwarves have the stone Wyrders’ Bane, and they’ve shown they know how to unleash its plague upon all those who wield the magical force of wyrd. With casters neutralized, a mighty blow has been dealt to the allied forces. The dwarves and trolls attack the keep, and the struggle to survive the war in the north is upon them.

Angelica, Jovian, and Joya’s journey is far from easy, but the future looks even bleaker when visions of a gathering darkness in the west and a congregation of angels could mark the beginning of the final war on the Ever After.

The Turquoise Tower is book six and the final book of The Revenant Wyrd Series.  This novel continues where book 5 left off.  The Lafaye children along with Maeven, Shelara, Caldemon, and Russell are headed to the Turquoise Tower, but first make a stop at the city of angels, where they battle a rephraim.  Meanwhile Grace, Dalah, Roselee and the Guardians make their way to the Ivory City with Mag and Astanel in tow to prepare for the battle of their lives.

This was a bittersweet moment for me as I loved this series so much.  As much as I wanted to read the outcome, I’m truly saddened to see it end.  These were characters I’ve been completely intrigued by and I hated to see them go.  I saw them grow into strong courageous people.  Once again, Travis Simmons doesn’t disappoint!  There’s nonstop edge of your seat excitement, it was very hard to put down.  All of our questions are answered and I was even surprised by things I didn’t see coming.  What more can I say?  This was an amazing epic fantasy about good versus evil, one I’m sure everyone will enjoy!