A Darker Past Book Review 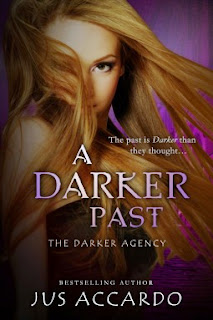 Synopsis:
The past is Darker than they thought...
Between helping her mother with the Darker Agency and laying the smack down on monster baddies, Jessie Darker puts the “normal” in paranormal. But lately, things have gotten a little crazy...even for a smart-assed half-demon teenage girl.
For starters, Jessie’s been contracted into fifty-five years of annoying servitude. To a demon. Then there’s Lukas Scott, her sexy new boyfriend. Once the former incarnation of Wrath, he’s been going through some...uh, changes. Like residual anger. And trading chaste hangouts for lusty make-out sessions.
But it’s when Lukas and Jessie accidentally release a Very Nasty Demon that things get really bad, setting into motion a chain of death and mayhem that threatens both Earth and the Shadow Realm. Jessie has exactly four days to fix it...before all of Hell breaks loose.

A Darker Past is book two in The Darker Agency series.  Seventeen year old, Jessie Darker has an interesting life.  By day, she's your typical high school senior with her best friend, Kendra. But in her off hours, she works alongside her mother, father(a demon), and boyfriend Lukas in an investigative agency.  While recovering some special Darker trinkets before they are in the public, Jessie angers a ghost that in turn damages a mirror that was keeping a demon trapped. Now they must race against time to uncover the secret to recapturing him.  Will they be able to piece the puzzle together? Is the rumors about the Belfair magic true?

This was a really great book with lots of action and never a dull moment. I loved how Kendra stood up for her friend to her mother.  The characters each had their own unique personalities and they complimented one another.  The descriptions of the Shadow Realm is very imaginative, you can easily visualize the image in your mind's eye.  The growth of Jessie gradually progresses as she soon realizes what is really important to her. I can't wait for book three too see what other trouble Jessie and Kendra get into. 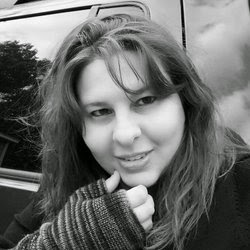 JUS ACCARDO spent her childhood reading and learning to cook. Determined to follow in her grandfather's footsteps as a chef, she applied and was accepted to the Culinary Institute of America. But at the last minute, she realized her true path lay with fiction, not food.
Jus is the bestselling author of the popular Denazen series from Entangled publishing. A native New Yorker, she lives in the middle of nowhere with her husband, three dogs, and sometimes guard bear, Oswald.
5 Stars Paranormal Romance YA