My Review:
This book gives you a peek into Jim Hopper's life before moving to Hawkins. It shows what a dynamic police detective he was in New York and also explains why he became a cop in the first place. The only reason I gave this story four stars was that I felt there should have been more interaction between Hopper and Eleven besides the brief comments between the two. The chemistry between Hopper and Delgado was amazing. They truly had each others backs and I loved that. By the second half of the book I was finally drawn in and captivated by this new enemy.

About the Author:
Adam Christopher’s debut novel EMPIRE STATE was SciFiNow’s Book of the Year and a Financial Times 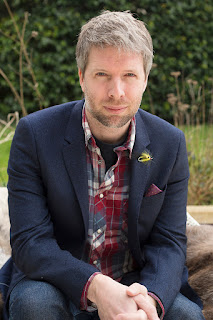 Book of the Year. The author of MADE TO KILL, STANDARD HOLLYWOOD DEPRAVITY, and KILLING IS MY BUSINESS, Adam’s other novels include SEVEN WONDERS, THE AGE ATOMIC, and THE BURNING DARK.

Adam has also written the official tie-in novels for the hit CBS television show ELEMENTARY, and the award-winning DISHONORED video game franchise, and with Chuck Wendig, wrote THE SHIELD for Dark Circle/Archie Comics. Adam is also a contributor to the STAR WARS: FROM A CERTAIN POINT OF VIEW 40th anniversary anthology.