REVIEW: THE HOPE OF REFUGE 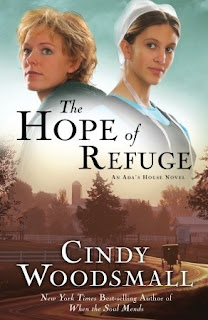 Raised in foster care and now the widowed mother of a little girl, Cara Moore struggles against poverty, fear, and a relentless stalker. When a trail of memories leads Cara and Lori out of New York City toward an Amish community, she follows every lead, eager for answers and a fresh start. She discovers that long-held secrets about her family history ripple beneath the surface of Dry Lake, Pennsylvania, and it’s no place for an outsider. But one Amish man, Ephraim Mast, dares to fulfill the command he believes that he received from God–“Be me to her”– despite how it threatens his way of life.

Completely opposite of the hard, untrusting Cara, Ephraim’s sister Deborah also finds her dreams crumbling when the man she has pledged to build a life with begins withdrawing from Deborah and his community, including his mother, Ada Stoltzfus. Can the run-down house that Ada envisions transforming unite them toward a common purpose–or push Mahlon away forever? While Ephraim is trying to do what he believes is right, will he be shunned and lose everything–including the guarded single mother who simply longs for a better life?

My Review
Cara is on the run, Crazy Mike has found her yet again.  Not only that, he’s read her private journal and now knows every detail about Lori.  She has to run, but where?  While waiting for a bus, her daughter begins drawing in her Mom’s old journal, together they see the name of a town start to surface under the drawing, this is where they go.  This is a true story of finding hope,  faith and second chances in the midst of very difficult circumstance.  I found the story so believable that I was immediately drawn in.  This was a wonderfully written story, well done Ms. Woodsmall!
5 Stars Christian Cindy Woodsmall