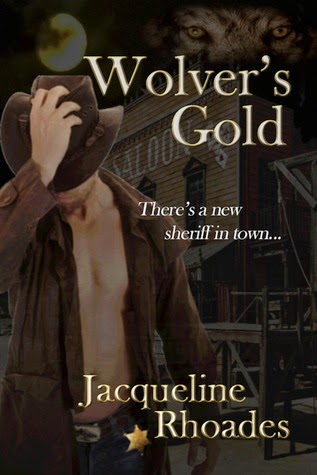 Lone wolf and Special Investigator for the ubiquitous Eugene Begley, Challenger McCall is sent to the town of Gold Gulch to take care of a problem that might involve the exposure of the wolver community. For McCall, it’s like stepping back in time - a hundred and fifty years back in time.

Gold Gulch is a tourist attraction where the wolvers take their work so seriously, they continue their Victorian lives long after the tourists have gone home. Much like their 19th century counterparts, the women are overworked and underpaid.

Rachel Kincaid is one such woman. Exercising the only power she holds, she has become a wolver oddity; a spinster who refuses to mate. Why would she, when she already has to take care of the short-staffed hotel, its restaurant and her ne’er-do-well father? Angry and bitter, Rachel decides she deserves a better hand than the one she’s been dealt and finds herself drawn to the handsome new sheriff, Challenger McCall. Why shouldn't she, for once in her life, enjoy the same freedom as the Soiled Doves on the hill?

Things get complicated when Rachel's wolf awakens after a long sleep and the town's women seem to awaken along with it. Papa's gambling debts leave them on the brink; the pack is at risk; and the women rebel. Oh, and don't forget the murders. If ever a pack needed rescuing, Gold Gulch is it, but as the girls up at Daisy's Bouquet point out, - A smart woman needs to look after herself!

"Wolver's Gold" is book five in the Wolver series. Rachel Kincaid has lived her entire life in Gold Gulch, where it's like stepping back in time. She decides to become Gold Gulch' s first ever spinster, that is, until the ruggedly handsome Challenger McCall walks into her life. Their attraction is undeniably powerful.  Then her world, as confusing as it already is, becomes turned upside down.

I have never been a huge fan of werewolf novels, but because of the uniqueness of the story I knew I had to read it. Even though the story is set in present day, this group of Wolvers have decided to have the town set back in the Victorian era. I thought that was pretty neat, it came across as a reenactment setting which brought their little town the income they needed to survive. Rachel Kincaid is a strong female main character, she doesn't let the community dictate how she should live. Challenger McCall also fights for justice as any good sheriff should. But when there's deception among the pack, McCall and his friend John Washington will stop at nothing to bring down Barnabas Holt and his cohorts. This was an amazing action packed paranormal romance, with a mystery to boot. I thoroughly enjoyed it, and I think you will too.