Episode 1 of the Wizards of Seattle Series

Jason wonders if his luck has finally turned around when he discovers he will inherit a luxurious home infused with ancient magic and a sizable fortune from a relative he’d never known existed. Of course, there’s a catch. His younger brother and his cousin will inherit equal parts of the inheritance and it is stipulated in the will that they must live together first before they gain possession of the estate.
All three of them are potential White Knights with the rare ability to practice advanced white magic. They must learn to use their new power and defend themselves from a secret organization that is armed with potent, black magic. This novella is the first installment of the Wizards of Seattle series.
Available at Amazon, Barnes & Noble, Kobo, and IBookstore.
Click here for a free book excerpt.

My Review:
I received a free copy of this novel in exchange for my honest review.
Inheritance is episode one of The Wizards of Seattle series. The story begins by introducing us to Jason, a young category three wizard with the unusual ability to read psychometry. He lost his job three months prior and was desperate to find another job. While out having dinner with his two best friends, he is attacked by a curse. His friends manage to distract it briefly but not long enough and eventually the curse strangles him. His best friend Monte revives him and is at the hospital when he awakens. Upon his return home he is visited by the executor of a distant cousin's will. In it, she states the her three chosen relatives must live at her estate for ten years practicing white magic and becoming white knights. If they choose not to become white knights, they must still live at the estate for the duration in order to receive their share of the property and four hundred thousand dollars.Jason grudgingly moves into the mansion, but soon realizes that living with his brother, Benjamin and cousin, Amy, isn't as bad as he thought it would be. He also finds out that the Valturas are responsible for the attempt on his life and his brother and cousin are in danger as well. During a battle with two of the curses, Ben unintentionally releases a spell on Jason, awakening his latent category six abilities. Will Ben, Jason, and Amy be able to survive the attacks by the Valturas? Will they be able to awaken their white magic in time to save themselves? Can they trust those around them? 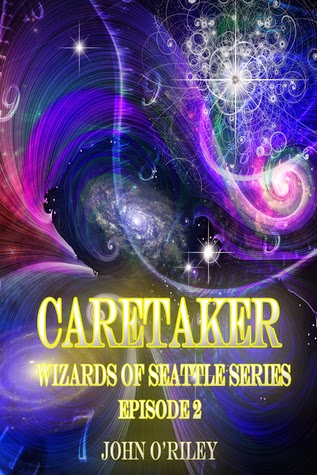 Episode 2 of the Wizards of Seattle Series
Jason has recently discovered his new category six wizardry was a result of a genetic experiment performed by a secret organization called the Ebullio. Now that he has broken free of their mind control enchantment, suppressed memories float to the surface and he remembers the terrifying abductions and genomic therapy that he and his younger brother, Benjamin, endured. Meanwhile, the Valituras have set their sights on Jason, unleashing powerful curses designed to kill him and his family. As Jason learns more about the Ebullio and the Valituras, he realizes that danger lurks behind every corner and the enemy could be hiding in plain sight. This novella is the second installment of the Wizards of Seattle series.
Caretaker is available at Amazon, Barnes & Noble, Kobo, Smashwords, and other book retailers.

Caretaker is episode two of The Wizards of Seattle series.  The story continues a couple of weeks after episode one ended.  We see Jason extremely exhausted and pale, which has everyone concerned.  But because of the mind control spell placed on him, he contributes it to working long hours, not his actual problem (you’ll have to read the end of episode one).  He’s still having difficulty creating spells now that he’s a category six, but continues to persevere.  Amy and Benjamin are embracing their White Knight abilities and are getting stronger.  Jason is determined to meet Radha, the caretaker of their power center.  When he finally meets her, he’s instantly drawn to her.

This series just keeps getting better and better!  Now there is mention of the gray angels.  I remember them from The Grumpy Old Wizards series.  It makes me wonder if all of the category six wizards are going to gather to fight the Ebuillo.  I’m looking forward to episode three, I can’t wait to see where John O’Riley is taking this series.  This story was so engrossing that I really hated to see it end.

John O'Riley began writing at a very early age. In fact, he's been writing for as long as he can remember. He is an award winning writer of novels and screenplays in the category of urban fantasy, comedy, mystery, science fiction and young adult. His movie feature screenplay, Cursed, is an Honorable Mention Winner for the 2012 Screenplay Festival. His most recent accomplishments include the screenplays Cursed, Project Pandora, Pinky Swear, Incipio, and Bad Sister which have been listed as Quarter Finalists, Semi Finalists, and Top Finalists in the 2012 Screenplay Festival, 2012 Filmmakers International Screenplay Awards, 2012 StoryPros International Awards, 2012 Pulsar Sci Fi Screenplay Contest, and the 2012 Reel Authors International Breakout. He loves reading fantasy, science fiction, and humorous fiction. Some of his favorite authors include Kim Harrison, Jim Butcher, Kay Hooper (Bishop Files/ psychic detective thrillers), Kat Richardson, J.K. Rowling, Angie Sage, Jayne Krentz, and Janet Evanovich. He currently resides in Washington state and owns a very friendly parakeet named Amy who helps spark his imagination.