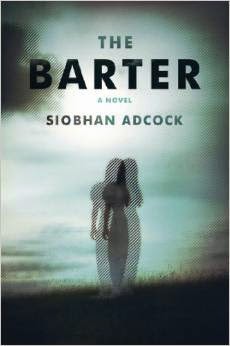 Synopsis:
The Barter is a ghost story and a love story, a riveting emotional tale that also explores motherhood and work and feminism. Set in Texas, in present day, and at the turn of the twentieth century, the novel follows two young mothers at the turning point of their lives.

Bridget has given up her career as an attorney to raise her daughter, joining a cadre of stay-at-home mothers seeking fulfillment in a quiet suburb. But for Bridget, some crucial part of the exchange is absent: Something she loves and needs. And now a terrifying presence has entered her home; only nobody but Bridget can feel it.

As Siobhan Adcock crosscuts these stories with mounting tension, each woman arrives at a terrible ordeal of her own making, tinged with love and fear and dread. What will they sacrifice to save their families—and themselves? Readers will slow down to enjoy the gorgeous language, then speed up to see what happens next in a plot that thrums with the weight of decision—and its explosive consequences.

Purchase: Amazon
About Siobhan Adcock:
I grew up in suburban Chicago and suburban Dallas, and attended Cornell University for both my undergraduate degree and, later, an M.F.A. in creative writing. For the past couple of decades (decades, people!) I've lived in Brooklyn.

I've worked in print and digital publishing since 1995. I started out in book publishing, working in marketing at HarperCollins Children's Books, and then at Anchor Books as a junior editor. A few years after Bertelsman and Random House merged, I left Vintage Anchor to work in digital publishing as an editor and contributor for iVillage, the women's community site. Later I worked for the wedding and lifestyle company now known as the XO Group (TheKnot, TheNest, TheBump), and after that, I moved to Conde Nast, where I was managing editor for the travel site Concierge.com and the food site Epicurious.com. Most recently I was executive editor at Epicurious, where I helped direct editorial strategy.

I am the author of a bossy instruction manual called 30 Things Everyone Should Know How to Do Before Turning 30 (Broadway Books, 2003) as well as Hipster Haiku (Broadway Books, 2006), a book of satirical—and very short—poems. My short fiction has appeared in Triquarterly, The Massachusetts Review, The Florida Review, and the young adult anthology Not Like I'm Jealous or Anything: The Jealousy Book.

My first novel, a literary ghost story about motherhood, work, and marriage called The Barter, will be published by Dutton in September 2014.
Connect with Siobhan:
Website | Twitter | Facebook