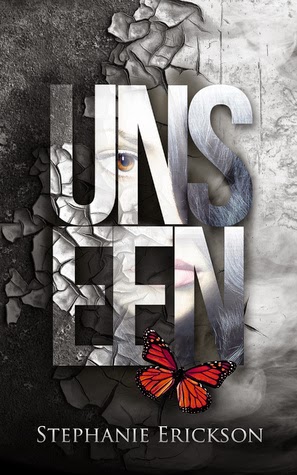 Synopsis:
Mackenzie Day constantly struggles to silence the voices in her head. The inner thoughts of those around her intrude upon every aspect of her life, threatening to turn it into chaos.

All her life, she thought she was alone as a mind reader—a freak.

Then a member of a secret organization called The Unseen suddenly introduces himself, and she’s immersed in a world she never knew existed. They teach her to hone her skills as a reader, but to what end? Secrets surround her, humming just out of reach, filling her with questions.

Who are they? What do they do with their mind-reading abilities? In the end, just how far will Mackenzie go to be part of The Unseen?

Mackenzie lived in her own world filled with music; you could say it helps keep her sane. Mac can hear other people's thoughts and sometimes it can be overwhelming, so she uses an iLs, an Integrated Listening System to block out the voices and help her focus at hand. Because this was her savior, she majored in music therapy. A chance meeting with a mysterious and extremely handsome man, whose thoughts she cannot hear, sparks her curiosity. Who is this strikingly handsome man? More importantly, why can't she hear his thoughts?

Unseen is an amazing paranormal romance that puts you on an emotional roller coaster. Mac's only family member was the aunt that raised her. She didn't understand her at all and thought of her as a burden. Mac worked so hard, with only her best friend Maddie by her side. Maddie didn't know that Mac could read minds, she just thought she could "read people" with her spidey senses. This was an amazing change of pace for me. I'm not sure what I was really expecting from this book, especially since i chose it based on the cover; I was happily surprised! The story was fast paced, I had a difficult time putting it down. This is one of those books that will keep you up at night to finish and even after you're done you'll spend hours reflecting. Just be sure to have a box of Kleenex at the ready, you'll need it for this one.

About the Author:
Stephanie Erickson has always had a passion for the written word. She pursued her love of literature at Flagler College, in St. Augustine, FL, where she graduated with a BA in English. She has received several honors in her writing career, including recognition in the 72nd Annual Writer's Digest Competition.

After graduation, she married and followed her husband in pursuit of his dream. The Cure and The Blackout were written to reignite Stephanie's passion, when she found the time. Now that he is settled in his career, it's her turn to devote more time and energy into writing.

Stephanie's new release, Unseen, is available now for preorder. The date of release is November 19th, 2014. She has three projects in place for 2015.

Stephanie, of course, loves to read and write. She also enjoys living on the beach on the Florida's Treasure Coast. Most of all, she and her husband are in love with their baby girl.
Connect with Stephanie:
Website | Facebook | Twitter