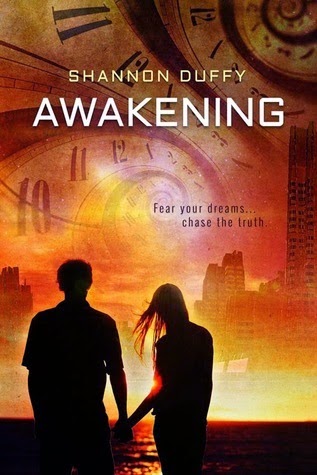 Synopsis:
A thrilling, futuristic sci-fi novel set in a unique and thought-provoking world, from author Shannon Duffy.Desiree Six (because she was born on a Friday) believes in everything the Protectorate stands for. She likes the safety and security of having her entire life planned out—her career, her mate, even the date of her death. She doesn't even think to question when Darian, her childhood friend and neighbor, is convicted of murdering his parents. They had seemed like such a loving family. But if he was convicted, then he must have done it.Then Darian shows up in her room late one night. He has escaped from the Terrorscape—a nightmare machine used to punish all Noncompliants—and needs Desiree's help. What he tells her rocks her world to its core and makes her doubt everything she's ever been told. With this new information, will Desiree and Darian be able to escape the Protectorate before it's too late?

What if your life was already completely figured out for you, right down to when you'll actually die?  Desiree Six Haven thought her life was perfect.  The Protectorate decided what each child would be when they grew up and their education was geared towards that goal, he chose who they would marry, when they would die, and most of all their dreams. They were all unable to sleep unless they used the Dreamscape.

Desiree was fine with all of it, believing the Protectorate, until she began dreaming of her future mate...her childhood bully.  She continues believing in the best until her childhood protector Darian climbs through her window.

Darian has grown up into a handsome young man, but he's also a wanted criminal. Not only is he accused of being "noncompliant", but he's allegedly murdered his parents and escaped from prison.  That night Darian exposes information to Desiree that there's no turning back from.

This was a great dystopian novel dealing with conformity. It gives off a sort of "Stepford Wives" vibe, but in more detail. You could completely understand the shock at knowing you have more family than you thought you had.  At the end of the novel it's left open ended for a possible book two, I will be eagerly awaiting it to see where it takes us.