The Stretchin' & Fetchin'™ plush line comes in four delightful characters; each has soft & cuddly fabric dogs love to snuggle with. With their long, stretchy bodies these adorable pals are great for Tug, Toss, Shake and Fetch! Each paw is tipped with a squeaker to engage and stimulate. What a combination, they are sure to be a favorite at play time!

I recieved a  Stretchin' & Fetchin'™ Eli Elephant in exchange for my honest review.  Here's what JW Pet says about Eli Elephant: 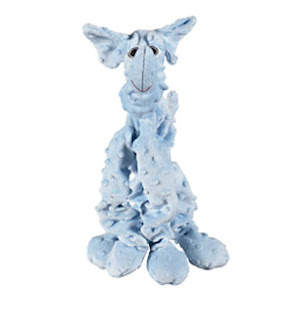 Every dog loves to snuggle, Eli Elephant offers textured nubby plush with a Stretch-tastic squeaky surprise inside every paw! He has a long, stretchy body that is great for tug, toss, shake and fetch! Eli is an enjoyable playmate that will engage and stimulate, truly a friend your dog will never forget! 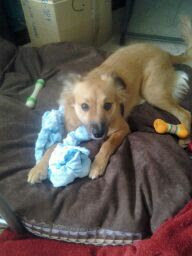 This is my little guy, also named Eli, he's an eleven month old Terrier/Sheltie mix.  He loves to play fetch, shake, tug or just squeak his toys.  About a month ago, we bought Eli a similar toy.  It only had one stretchy band and a squeaker in the head.  After about 30 minutes of play the stretchy band gave out on the little guy.  His brand new toy no longer did what it was suppose to.

A week ago we received Eli Elephant in the mail.  From the moment the toy was out of the packaging, my little guy went nuts!  Not only does he play tug and fetch with it, he tosses it in the air on his own and this toy goes everywhere he does.  It's strong, durable, has a squeaker in each paw as well as the head.  Each leg has a stretchy band for long lasting play.  This is a fantastic toy, great for dogs that love to play.  Definitely a Five Star Dog Toy!
5 Stars product review