Bring Down the Furies Promo 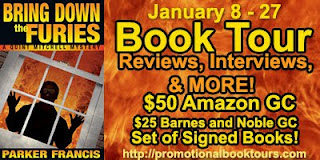 Follow the Author: Website | Facebook | Twitter
The author is giving away $50 Amazon gift card, $25 Barnes and Noble gift card and autographed copies of the two Quint Mitchell Mystery books, MATANZAS BAY and BRING DOWN THE FURIES. Fill out the form below to enter! Follow the Tour
a Rafflecopter giveaway
Promo