Through the Withering Storm Book Review 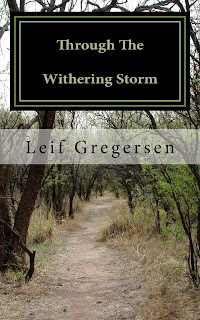 Through the Withering Storm: A Brief History of a Mental Illness is the autobiography of a boy who becomes a man in a cold and seemingly impossible world. This book, with foreword by prominent psychiatrist Dr. Brian Bishop, takes the reader through the true life horror of growing up mentally ill. The author shows us what it is like to juggle school, a dysfunctional family, a ‘career’ as an Air Cadet and all the emotions and troubles that come with adolescence – until genetics throws in a curve ball and the worst imaginable happens.

This book also takes the reader inside the hallways and chambers of a hospital treating the violent, criminal and institutionalized in a place built for ‘shell-shocked’ World War I veterans.

As with many illnesses, there is denial and the struggle doesn’t end in these halls. Despite delusions, fights, arrests, reprisals and being institutionalized, years are wasted fighting treatment and refusing medications.

From the cold and frozen north country of Alberta, through the Rocky Mountains and coastal cities of Vancouver and Los Angeles, the author constantly struggles to shake off the demons that haunt him. He loses friends and possessions, becomes estranged from his family and relinquishes every shred of dignity. Each time he is beaten down, he struggles back to find a small piece of sanity, just enough to keep him going. Finally, with acceptance of his illness, comes treatment and peace.

For any parent or caregiver living with a troubled teenager, this book provides valuable insight into the behaviours of mentally ill youth. For others, such as healthcare professionals, family members or those that suspect they may have an illness themselves, this book sheds light on the symptoms of being bipolar and the all-too-common journey through madness.

Ultimately, this work demonstrates how precious and precarious our lives and relationships are. In the profound words of Dylan Thomas, this book simply says to all who open it and take part in the tragedy that is the human condition, “Do not go gentle into that good night. Rage, rage against the dying of the light.”
Purchase: Kindle | Paperback | Nook

My Review
I received a free copy of this novel in exchange for my honest review.   This is the story of Leif Gregersen, a young man suffering from mania and bipolar disorders.  His story hit home for me because I suffered silently with anxiety and severe depression for years before I was diagnosed and treated.  I loved Leif’s writing style, the way this was written you don’t feel like it’s an autobiography.  He had many ups and downs before he finally realized that he needed help.  My heart broke for him the first time he was placed in a psychiatric hospital, no one told him what his diagnosis was.  I think that would have helped him come to terms sooner.  Throughout the story, he’d do some ridiculous thing and say “that’s how they do it in the movies”, so his reality was rather delusional.  His story gives us great insight from the patient’s point of view.  This is a good book for a caregiver or family member of someone mentally ill, to finally understand the internal battles that we struggle with everyday.

About the Author
I grew up somewhat isolated from the harsher forces of the world in St. Albert, a small town just outside of Edmonton, Alberta. Most of my younger years were filled with images of very happy times – trips everywhere from California to Copenhagen, constant school successes and football games in the field near my house that seemed to last forever.

But all was not okay. There were times when my father would discipline me severely or I would come home to find an ambulance in our backyard taking my mother to the hospital for yet another suicide attempt. Although I knew that depression ran in our family, I had no clue of the fearsome beast that was growing inside me.

At that time, I was more concerned about my growing collection of comic books, bought with money my sister would give me for doing her dishes or earned as a bean-picker or weed- puller on a farm not far from town. To be able to buy more comics, I even lied about my age to get a paper route and picked up more money by shoveling walks that hadn’t been done on the route.

Somewhere after the end of elementary school, there was a profound shift. It seemed the wind ran out of my sails and the transition to junior high was not a smooth one. I gave up on sports and I began to hate school and the people in it.

The remaining school years became a painful, out-of-control descent into madness. Gripped by mental illness, my thoughts, actions and behaviours became increasingly bizarre. My world became a true life horror movie of growing up mentally ill. Despite delusions, fights, arrests, reprisals and being institutionalized, years were wasted fighting any form of treatment, denying the illness and refusing medications.
Fortunately, for the past 15 years, my life has stabilized. I have accepted treatment and medications. Today, I have steady work and can afford some of the things I only dreamed of before. My computers, my 1994 VW Golf, a decent apartment and, above all, my books. From the age of three, my father exposed me to literature of the highest quality. Today, he is a much kinder, gentler and alcohol-free 72 year-old. I have him to thank for my passion to read and write.
Connect with Leif:
Website | Goodreads
4 Stars Memoir Nonfiction