Minus One: The Drew Smith Series Book Review 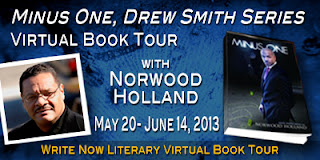 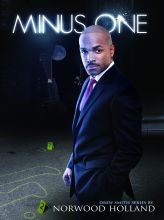 Minus One is the prequel to the Drew Smith series. Before the ink is dry on Drew Smith's license to practice law he finds himself at the center of a murder mystery.

Norwood Holland takes us back to the beginning when Drew Smith launches his legal career. The recent law school graduate works as a hotel concierge and befriends two bellmen Medhat and Julio. This eclectic trio form a solid fraternal friendship put to the test when Medhat is kidnapped after running up a drug tab he can't pay. Rescued by his crew he then becomes the prime suspect in a string of murders.

Driven by their romantic entanglements the attorney is captivated with a pretty Latina whose father objects to her dating a Black man. Minus One captures Drew Smith's evolution from youthful indiscretion to a professional burdened with seriousness of purpose.

Julio and his Filipina love find themselves expecting, and Medhat’s passion for blondes gets him snared in a femme fatal's net.
Purchase: Amazon

My Review
I received a free copy of this novel in exchange for my honest review.  Drew Smith is working as a hotel concierge; he’s just passed the bar and is trying to figure out what his next step is.  He befriends Medhat and Julio, two bellmen that work there.  They become quite the trio, and add excitement to Drew’s otherwise mundane life.  Their friendship is put to the test when Medhat’s antics causes him to be the prime suspect in the murders of some rather colorful people.

What a book!  I love a good mystery and this novel does not disappoint.  It’s filled with action, twists, and suspense.  There are characters you will love to hate, and some you want to slap and ask what were you thinking????  This was a great, hard to put down page turner, a must read for any mystery fan. 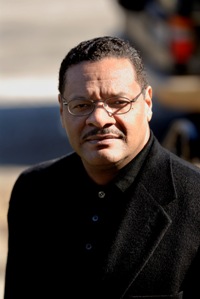 Norwood Holland is a freelance writer, lawyer, and author of the Drew Smith legal thriller series based on the capers of an urban trial attorney.  He is a graduate of Howard University School of Law with a bachelor’s degree in English from Fisk University where he studied under the renowned Harlem Renaissance author Arna Bontemps.  Holland favors D.C.'s local color in his fiction and currently writes the blog editorialindependence.com devoted to promoting independent authors among other things.

He has served in several government agencies including the National Labor Relations Board and a number of Washington’s top national law firms.  In the mid 90s Holland began freelancing for the local media.  Some of his credits include The Writer Magazine, the Examiner, and Black Literature Magazine.  Minus One follows up on the success of Sleepless Nights, the first in the Drew Smith Series.