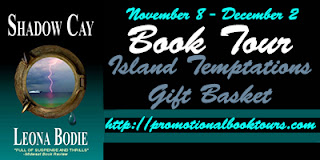 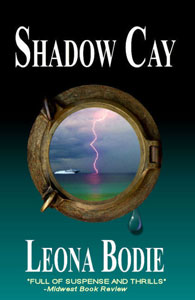 When the Nesbitts anchor in the Southern Bahamas one night in a moonlit cove, Madeleine discovers someone wants to make sure her family never makes it out of paradise alive. The double murder of her parents shatters the only security she’s ever known. Now thrust into a world of international intrigue, she vows to find answers before the killer returns for the next of kin. ‘Shadow Cay’ is a contemporary thriller about the bravery of those determined to fight injustice.

I received a copy of this novel in exchange for my honest review.  Madeleine Nesbitt has had a life filled with difficulty, from birth until the age of seven; when they remove the tumor the size of a Honeydew melon, from the back of her head.  Since the surgery she begins to have a sixth sense of sorts, not wanting to worry anyone she keeps this to herself.  At the age of eight, the wealthy man that paid for her surgery (and also family friend), takes Maddie on one of the newest cruise liners for a day trip.  Maddie has a really bad feeling as she approaches the ship but it is brushed aside.  The day trip turns tragic as something happens to the ship and it  begins to sink.  As she begins to sink, she sees an ominous character.  Luckily Maddie is saved by a young man whose name she does not recall and haunts her dreams.  This book is an unexpected thrill ride, excellent characters you can relate to, love, and hate.  This book is very descriptive and makes you feel like you’re there in the moment.  An awesome book through and through!

Leona DeRosa Bodie is Vice President of the Florida Writers Association, a nonprofit organization of 1,300 members. She started doing the happy dance when her debut thriller ‘Shadow Cay’, won First Place in the Mystery/Thriller/ Suspense category in the 2011 Reader Views Annual Literary Awards, and hasn’t stopped yet. Her biggest surprise and most memorable milestone . . .When Gelati’s Scoop recognized it as one of the top thirty-five novels of 2010, she landed on the list alongside such giants as James Patterson, David Baldacci and Daniel Silva. Leona is now working on two novels, including ‘Seas of Fury’. She currently resides in Florida and often collaborates with her husband, a Miami-Dade forensic specialist for 21 years, who appeared in the pilot episode of the long-running TV series, CSI. For more information about her and her books, check out her website: http://www.leonabodie.com.