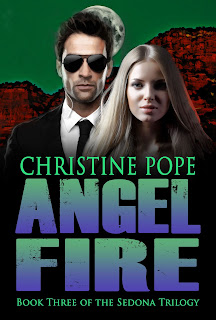 Desperate to save her friends and family, Kirsten accepts the assistance of Martin Jones, a mysterious Man in Black who turns out to be far more than he seems. He helps to awaken the powers that have lain dormant within her…and also compels her to expose the shocking secrets buried in her past. But Kirsten soon learns that giving her heart might not be enough, and that the confrontation with the alien forces may demand her to make the ultimate sacrifice.

A native of Southern California, Christine Pope has been writing stories ever since she commandeered her family’s Smith-Corona typewriter back in the sixth grade. Her short fiction has appeared in Astonishing Adventures, Luna Station Quarterly, and the journal of dark fiction, Dark Valentine. Two of her short stories have been nominated for the Pushcart Prize.

Christine Pope writes as the mood takes her, and her work encompasses paranormal romance, fantasy, horror, science fiction, and historical romance. She blames this on being easily distracted by bright, shiny objects, which could also account for the size of her shoe collection. After spending many years in the magazine publishing industry, she now works as a freelance editor and graphic designer in addition to writing fiction. She fell in love with Sedona, Arizona, while researching the Sedona Trilogy and now makes her home there, surrounded by the red rocks. No alien sightings, though…not yet, anyway!
Connect with Christine Pope:
Website | Twitter | Facebook