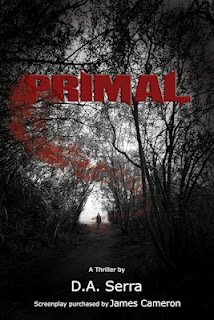 The writer who made you laugh with Punky Brewster, who made you cry with Just Ask My Children, will now make you cringe with PRIMAL. This story was originally purchased by one of America’s most prestigious storytellers, James Cameron.

What if the worst happens and you are not a cop, or a spy with weapons training and an iron heart? What if you’re a schoolteacher – a mother? In this gritty crime thriller a family vacation takes a vicious turn when a fishing camp is invaded by four armed men. With nothing except her brains, her will, and the element of surprise on her side, Alison must kill or watch her family die. And then – things get worse.
Purchase: Barnes & Noble | Amazon


I received a free copy of this novel in exchange for my honest review.  Allison has a wonderful life.  She’s married to the man of her dreams, has a wonderful 9 year old son, and she’s a great schoolteacher, adored by her students.  On her son’s 9th birthday, as his gift, he gets to choose their vacation.  To Allison’s dismay, Jimmy chooses to go to a fishing camp.  Allison, being a city girl, finds this a gross and dirty endeavor but decides to consider it an adventure.  They all get more than they bargain for when four criminals invade the camp.  Will she be brave enough to save her family?

This was an amazing novel!  When I read the synopsis, I was skeptical.  I mean, how could someone, who wrote a fun series like Punky Brewster be able to write a good crime thriller?  Well, D. A. Serra delightfully surprised me.  The harshness of the criminals is perfectly described.  I felt like I was one of the hostages in the lodge watching everything happening.  This was an awesome edge of your seat page turner, one that you cannot put down. It is definitely one of my favorite reads this year!

About D. A. Serra