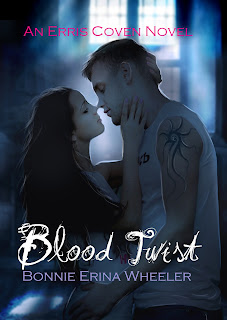 From Bonnie Erina Wheeler, the author who brought you Fate Fixed, comes the second installment in the Erris Coven Series, Blood Twist.

Find out what happens to the Erris Coven when Lexie's BFF Liz comes to town.

Braden Murphy knew he was going to die. There was a twist to his family secret – one that was forced upon him from the time he was a child. For years he envisioned his final days and tried to be strong enough to leave his family. Now that it was time, he was ready to make good on a deadly promise. Except for one unexpected glitch, a raven haired beauty insisted on joining him.

Liz Sanders thought her best friend’s stepfamily was weird, but she never would have guessed they were werewolves. Now Liz must travel with a secretive half-vampire in search of a lycanthropy cure. Landing in a nest full of blood thirsty vampires wasn’t on the agenda, but neither was falling in love.

Braden is tempting, but Liz’s feelings for him are complicated. She wishes he would open up about his past and give her a reason to trust him.

Just when Liz thinks she can let her guard down, she’s forced to confront the evil that has been stalking Braden’s past for years. Death is here and ready to destroy everything they've fought to save.
Amazon | Smashwords

I received a free copy of this novel for my honest review.  This is book 2 of the Erris Coven Series.  This book certainly doesn’t disappoint.  The character development was fantastic; you feel a connection with each character.  The book also toggled points of view between Braden and Liz, which I absolutely loved!  If you like paranormal romance, mystery, and dark novels or any one of these, this is definitely the book for you.  I enjoyed it thoroughly and I hope there will be many more books to the series, it’s a truly unique story.

Bonnie Erina Wheeler is a lifelong resident of New England and a University of Connecticut student.

Having grown up in Berkshire County, Massachusetts, Bonnie discovered her love of writing early on, but did not begin writing novels until May 2011. As the daughter of author, Glen William Ruane, storytelling and world building is a family affair. Bonnie’s daughter, Miranda E. L. Wheeler and son, Robert D. Wheeler, share in the family’s passion and have both published in the last twelve months.

When not in class or working on her next novel, Bonnie enjoys spending time with her husband, Jerry. Together the two have been writing their own special love story since marrying in April of 1995. Their children Miranda, Justin, and Bobby give them great joy. Their family is made complete with the addition of Petey, a Spanish water dog, they adopted from their local pound.

Bonnie’s plans for the future include writing more novels in the Erris Coven Series, as well as, writing several contemporary young adult novels that have been in development for some time.
Connect with Bonnie:
Blog
Facebook
Goodreads