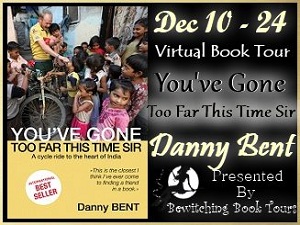 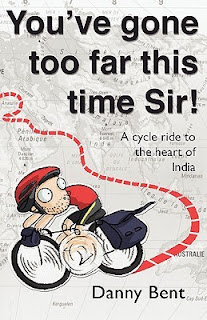 Have you ever woken up in the sultry heat of the morning, your hair and beard teeming with maggots, and then had potatoes picked out of your ears?

Have you ever felt the cold barrel of a semi automatic gun against your forehead?

When Danny Bent cycled 15,000 kilometres from the UK to India to raise money for ActionAid, it was a decision that took twenty years and one minute. For twenty years he had wanted to do something to raise money for charity. The one minute was when as their teacher he was put on the spot by his pupils and declared that the means was by bike, and he was going to India.

What he had signed up for was slogging along roads with trucks bearing down on him, unable to see and choking in the smog; shooting down treacherous descents with 100 foot drops, shaking with cold and too numb to brake; muscle burn and saddle sores; delirium and food poisoning; thirst and malnutrition; foul and insanitary conditions; life-threatening crises; obstructive border guards, crazed dogs and  inquisitive passers-by.

'You've Gone Too Far This Time, Sir!' is a real and compelling blow-by-blow account of Danny's trip across Europe, the former Soviet Republics, Russia, China, Pakistan and India.

And what people he met! They are the true delight of this book, mostly charming, sometimes reckless, occasionally threatening, always unpredictable, and forever inviting Danny to be up for the challenge of entertaining them, in one instance by dancing in front of a packed stadium, in another by eating sheep's brains in a local night market.

Danny turns the wheels, you turn the pages. The pace is relentless. The story is both heart-stopping and heart-warming. The arrival is breakdown-and-cry emotional. And there's loads of fun and wonderment along the way too.

What a book! What a ride! Live your dream.

I received a free copy of this novel for my honest review.  After Danny Bent almost dies after falling off of a cliff, he gets this striking revelation that his life isn’t going the way he wanted it to.  He pretty much returns home to his 3rd grade class to tell them he’s going away to teach kids in India.  They ask how he’ll get there, he says fly, then sees the lesson he’d taught the kids on being green, how much pollutants planes give off in our environment.  He changes his answer before completely thinking it through and says cycling, it turns out that he ended up living his dream of cycling for charity.  This is a story of his journey from England to India, the people he encountered, the cultural differences and his adventures.  The story was pretty interesting and filled with historical information on the areas he’d passed through, but not as much as I would have liked.  All in all a pretty neat adventure!


Danny Bent was born near Buxton in the Peak District into a very loving and supportive family.

His father was an international athlete and Danny was necessarily introduced to the attractions and rigours of sport at a very early age, and to cycling (down steps) not long afterwards.

He is an international tri-athlete and a bog diver, and has an aptitude for the sort of adventures which require major endurance and a great deal of luck to survive.

Fortunately for us, he is also an excellent raconteur, loves life and hugs people whenever possible, which means he gets access to a host of excellent stories and escapades he can roll around his tongue, and entertain us thoroughly, all at the same time.