Here Among Us Book Review 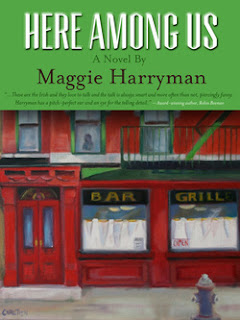 When unemployed San Francisco attorney, Flynn O’Shea, and her teenaged daughter, Didi, are summoned to New Jersey for the Thanksgiving holiday by Flynn’s socialite sister, Maeve, she expects a fight.

After all, she has been battling Maeve most of her life. Disagreeing about the extent of their Irish mother’s creeping dementia and the fate of the family’s thriving restaurant business, named for their beloved, long dead father, Paddy, is surely a recipe for a world-class brawl.

What Flynn doesn’t expect is the fragile truce the sisters forge to save O’Shea’s from the clutches of Maeve’s scheming husband, Jeffrey. Flynn and Maeve are reluctantly aided by their forty-four-year-old brother, Osheen, a handsome Peter Pan still cruising the Jersey shore, getting high and dodging responsibility.

And while Didi tries to convince her mother that “everything is as it should be,” just when Flynn is sure she’s gained the upper hand on Jeffrey, her own mother’s shocking confession sends her into a wine-soaked tailspin and forces her to deal once and for all with the ghosts of her past. Devastated, Flynn must choose to save O’Shea’s or risk losing forever all she has left of her father.

In Here Among Us, the O’Sheas find themselves dealing with the very timely issue of Alzheimer’s, a disease that strips the victim's identity and wreaks havoc on the family left to pick up the pieces. But Flynn, Osheen and Maeve’s troubles began long before their mother started to “slip.” For the O’Sheas, much of their shared angst is rooted in the single most devastating event of their lives—the death of their father when they were young children. The novel explores not only how deep wounds can seem impossible to heal, but how refusing to let go of the stories the O'Sheas desperately cling to about who they are, threatens to hasten their demise.
Get your copy today from Amazon
My Review
I received a free copy of this novel for my honest review.  Alzheimer’s is a pretty tragic disease, and Here Among Us does an excellent job describing how a family deals with the issues that come up and figuring out what’s fact and what’s fiction.  This was a great book, and you could feel for each character.  I think out of all of them, I related to Flynn the most.  Returning home for Thanksgiving, she felt like an outsider getting glimpses of her siblings’ lives.  The close unit they once had been was no longer there.  She’d grown up and had her own life 3000 miles away while everyone else stayed behind.  It also broke my heart that none of the three kids had ever gotten over their dad’s death, which had occurred when they were little kids.  Now as adults, seeing their mom losing her faculties was more than they could bear.  This is a fantastic book about acceptance, family, love, letting go and moving on. 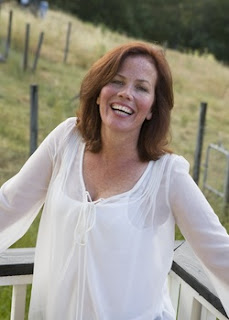 Maggie Harryman was born in New Jersey and moved to San Francisco soon after college. She received an MA in Creative Writing from San Francisco State University and spent the ensuing years working as a copywriter in various industries including healthcare, tech and real estate/finance.

Maggie lives in Northern California in the heart of wine country, has two wonderful children in college and an old, faithful dog named, Humphrey.

Here Among Us is her debut novel. She also has two short stories on Amazon; Jesus, Mary and Joseph Michael Duffy Has Arisen and Cleaning Naked.