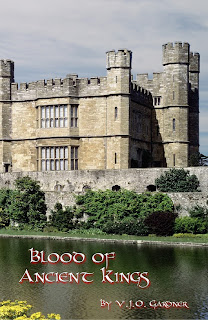 A medieval story of love, honor, and courage. As a young prince grows up and advances through the military ranks, with his true identity unknown to his friends, he meets a young girl and they become friends. As the years pass their friendship blossoms into true love, knowing that she already has an arranged marriage and he being royalty most certainly has one as well, they still continue with their relationship. As their friendship progresses he must be courageous as he goes through many trials, testing his love for her, his loyalty to the kingdom, and in doing what’s right as an officer and a gentleman. The story spans multiple generations, their families deal with many problems, going from the pain of death, to the joy of birth as they feel the blood of the ancient kings running through their veins. The book was written with young adults in mind, however with no foul language, graphic sex or violence they are appropriate for reader’s as young as ten. The author allows the reader’s imagination to fill in between the lines with their own experience, so even parents and grandparents will enjoy them. The story begins with King Burkhart, who is an evil tyrant of a king, holding his beloved wife and queen as she is dying from giving birth to his first born. Suddenly the door is kicked open! Colonel Langward from his own army, now fighting to take the kingdom from him, is standing there with his bloody sword in hand. As King Burkhart kneels at his conqueror’s feet hoping for death so he can join his beloved wife, his only true love, he hears the cry of his new born child! The new king has compassion and instead of killing him, allows him to live to raise his daughter but he must live among the very people he abused as king. He is given only what he can carry with him and taken to a small village. On his first night there he wakes to find the tiny house on fire. He grabs his infant and the bag with their few belongings only to find the door will not open, it’s blocked! He breaks through the door to find the enraged villagers that are burning the house, he runs trying to find a place to hide as he is pelted with rocks. He runs to a bridge over a brook and crawls under it, into to the mud to protect his infant knowing he must survive, if only for her. For the first time in his life he is truly afraid of death, but not for himself, for his daughter.
Purchase: Amazon | Barnes & Noble
My Review
I received a free copy of this novel in exchange for my honest review.   I had extremely hopeful thoughts when I began reading this book.  After all, when you think of a medieval story, whether romance or otherwise, kingdoms are constantly at war with one another.  Even the portion where Langward fought to take over as king has been omitted from the book.  There was a sweet romance portion but the historical portion is exceedingly lacking.  The 400+ pages this book has seemed to drone on with repetition and over all, I was quite disappointed.  I love historical romance for the mere fact that it has some history in it with a mix of romance; this has romance that’s it.  It is a pretty clean read for a tween girl, especially if she’s not interested in the history part.  The concept for the story was a great idea, and synopsis gave me the “Must Read” feel.  Unfortunately, this book had the potential to have become something really great but didn’t.

About the Author
Growing up in a small Utah town, I was a voracious reader. In college I took Fantasy Lit and writing classes. I’ve always enjoyed observing people and how they interact based on their individual experiences and upbringing. I found that I enjoyed writing to take a break from the reality of life. After trying my hand at a variety of jobs, I felt it was finally time I begin to publish what I had been writing.


There have been so many great authors that I have learned from and a few very poor ones. I do not presume to compare myself to any other author’s style but only attempt to tell the story in such a way as to immerse the reader in the story. Just as some of the characters spend most of their time trying to figure out where they fit in this life, I too have been searching for a place where I fit only to realize that it’s the journey of discovery that is the most important part of life.
Connect with V. J. O. Gardner:
Website | Twitter | Goodreads