A Song For Julia Book Review 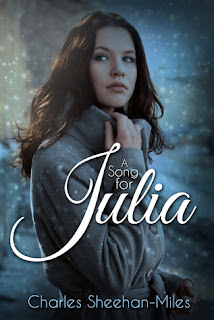 Everyone should have something to rebel against.

Crank Wilson left his South Boston home at sixteen to start a punk band and burn out his rage at the world. Six years later, he’s still at odds with his father, a Boston cop, and doesn’t ever speak to his mother. The only relationship that really matters is with his younger brother, but watching out for Sean can be a full-time job. The one thing Crank wants in life is to be left the hell alone to write his music and drive his band to success.

Julia Thompson left a secret behind in Beijing that exploded into scandal in Washington, DC, threatening her father's career and dominating her family's life. Now, in her senior year at Harvard, she's haunted by a voice from her past and refuses to ever lose control of her emotions again, especially when it comes to a guy.

When Julia and Crank meet at an anti-war protest in Washington in the fall of 2002, the connection between them is so powerful it threatens to tear everything apart.
Purchase: Barnes & Noble | Amazon

I received a free copy of this book in exchange for my honest review.  Crank Wilson has a bad history.  He left home at sixteen, living on the streets, dropping out of high school.  He has a volatile relationship with his father, a Boston police officer, and doesn’t speak to his mother.  The only person he cares about is his little brother Sean.

Julia Thompson has it all, beauty, brains and a love of music.  She also has a damaged past, secrets she has told no one and no desire to allow anyone into her heart.  Will she ever open up to find closure?

This was a great story of love and forgiveness.  I really loved how realistic this romance novel was.  The characters are people you can easily connect with.  Julia and Crank had this instant attraction, she wanted no commitment and he wanted the opposite.  I spent a lot of time yelling back at Julia’s mother, there were moments that just completely broke my heart.  Although this was a love story, they both had to overcome emotional obstacles and there were many tearful moments.  Be sure to have some Kleenex ready for this beautifully written romance.

Charles has been a soldier, nonprofit executive, short order cook, IT manager and run a restaurant. He doesn't believe in specialization. He currently works as a communications and outreach specialist for a law firm representing disabled veterans.