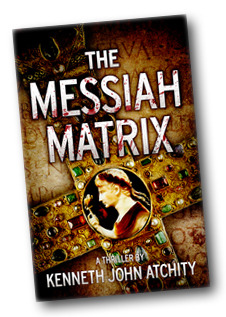 To what lengths would the Vatican go to suppress the secret origins of its power?

The Messiah Matrix is a myth-shattering thriller whose protagonists delve into the secrets of the past—and expose those who hide them still.

A renowned scholar-monsignor is killed in a mysterious hit-and-run in Rome. A Roman coin is recovered from a wreck off the coast of ancient Judea. It’s up to his young American protégé--a Jesuit priest--and a vivacious, brilliant archaeologist to connect these seemingly disparate events and unravel the tapestry that conceals in plain view the greatest mystery in the ecclesiastical world.

What they uncover is an ancient Roman imperial stratagem so controversial the Curia fears it could undermine the very foundations of the Roman Catholic faith.

From the ancient port of Caesarea to Rome's legendary catacombs and the sacred caves of Cumae, this contemporary novel follows their exhilarating quest to uncover the truth about the historical existence of the real "Christian Savior."

The Messiah Matrix may prove to be one of the most thought-provoking
books ever written.
Purchase: Amazon | Barnes & Noble

I received a free copy of this book in exchange for my honest review.    This was a great thrill ride.  The monsignor dies leaving a cryptic message.  It’s up to archeologist Emily, and Jesuit Priest, Ryan to find the connection between his death and a Roman coin.

Although the book starts off a little slow, it does pick up quite the pace later on.  Dr. Atchity weaves a fascinating tale, with a great adventure and lots of action.  The story was so well written that it actually has plausibility if it wasn’t a work of fiction or if someone was faltering in their faith.  I loved the plot and the characters were great, you could connect with them.  If you like archeological adventures like Indiana Jones and you don’t mind the slow start before the action starts, this is a great book for you.

Dr. Kenneth Atchity, former professor of comparative literature at Occidental College in Los Angeles and Fulbright professor to the University of Bologna, is author of 20 books, including scholarly books on Greek, Roman, and medieval Italian literature. In his second career as a literary manager, writers’ career coach, and producer he has launched hundreds of client books and two dozen films. His previous book, completed for New York Times bestseller William Diehl, is Seven Ways to Die. The Messiah Matrix was constructed from his lifelong study of all things Roman Catholic and his repeated visits to Rome while a professor of classics as well as producer.
Connect with Ken:
Website
4 Stars Historical Fiction Thriller