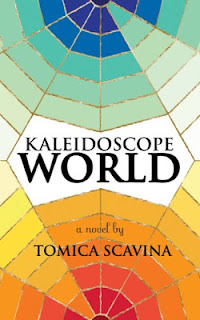 A collector of kaleidoscopes and lousy relationships, Dahlia Kasper leaves her possessive alcoholic mother and moves from New York to Barcelona. In search of lost bits of her childhood, she starts living in an apartment where her father was murdered when she was four. As soon as she enters the apartment, strange things begin to happen.
Her favorite kaleidoscope becomes a gateway to another dimension where she encounters a ghost of a famous physicist from the 19th century who tries to persuade her that reality is like a moth-eaten sweater – full of holes. He needs her to help him plug up these holes and save the world from vanishing, while the only thing Dahlia really wants to save is her sanity.
This is just a part of Dahlia’s problems. An elderly cello-playing neighbor turns her emotional world upside down and her longing for lost home takes her further than she ever imagined she could go. To collect all the scattered kaleidoscope-bits of her life together, Dahlia needs to go through an intense inner transformation that takes courage and a sharp sense of humor.

My Review
I received a free copy of this book in exchange for my honest review.    Dahlia Kasper, she’s been raised by her alcoholic, manipulative mother.  In order to have a live completely her own, she decides to leave New York and move to Barcelona, far away from her mother but into the apartment her father was killed in when she was four.  She meets Felipe, her neighbor and childhood friend that she doesn’t remember.  Then there’s the handsome older man, Javier.  When he looks at her, it’s as if he’s looking into her soul.

This was a great read.  Dahlia’s emotional coldness came from being raised by her alcoholic mom, who made her feel guilty for wanting just about anything.  The situation was certainly believable as was the outcome.  There were quite a few instances where I wondered if life would ever give her a break.  Then I began wondering why she wasn’t seeing the ghost physicist long before.  During her quest to remember her childhood, there was lots of humor, with twists that threw me!  This was a great intriguing page turner.  Now that it’s over, I feel like I’m losing a friend.  If you like humorous ghost stories, this is a must read! 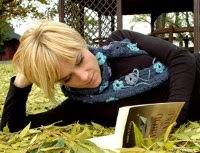 Tomica Scavina (1975) is a psychologist, who, at some point in her life, felt that her professional life was squelching her creativity. She diagnosed herself as "overly normal" and returned to her forgotten love of writing fiction to unleash her creative streak. This resulted in three novels. Tomica lives in Croatia and for now the only one in English is Kaleidoscope World. It is a psychological thriller with elements of mystery. If you find anything "normal" on its pages, let her know - she'll find a way to cure it.
Connect with Tomica:
Website | Goodreads | Twitter
a Rafflecopter giveaway
5 Stars Giveaway Paranormal Thriller